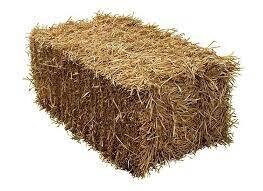 Hay is grass, legumes, or other herbaceous plants that have been cut and dried to be stored for use as animal fodder, particularly for large grazing animals raised as livestock, such as cattle, horses, goats, and sheep. However, it is also fed to smaller domesticated animals such as rabbits and guinea pigs. Pigs may also be fed hay, but they do not digest it as efficiently as herbivores.

Hay can be used as animal fodder when or where there is not enough pasture or rangeland on which to graze an animal, when grazing is not feasible due to weather (such as during the winter), or when lush pasture by itself would be too rich for the health of the animal. It is also fed when an animal is unable to access pasture, e.g. the animal is being kept in a stable or barn.

Save this product for later
Display prices in: NZD